If you’ve read the popular Treasure Island adventure novel, then you must have endlessly fantasized about being on a ship with pirates. Sea of Thieves introduces players to sailing the seas and adventurous life on an island. However, it’s not all roses, as you can end up at the bottom of the ocean the next second.

You can also lose all those precious treasures to an attack from a monstrous sea creature. We want you to have the best gaming experience, so we’ve taken the time to compile the tips you’ll find here. You can also buy Sea of Thieves Hacks to help you get past some tight corners.

5 Advanced tips To Survive in Sea of Thieves

Know the items in your pirate kit

This is the first of 5 Tips to survive in sea of thieves. Imagine being handed an empty pistol and some bullets when you don’t have a basic knowledge about guns and how to use them. If it’s on a battlefield, you can count yourself as good as dead. Playing Sea of Thieves with items you can’t use is as good as not even having them in the first place.

Your pirate’s kit contains items such as bananas, a bucket, a compass, planks, a lantern, a shovel, etc. Planks, for example, are used to repair your ship from damages dealt to it by an enemy or the monstrous Kraken. 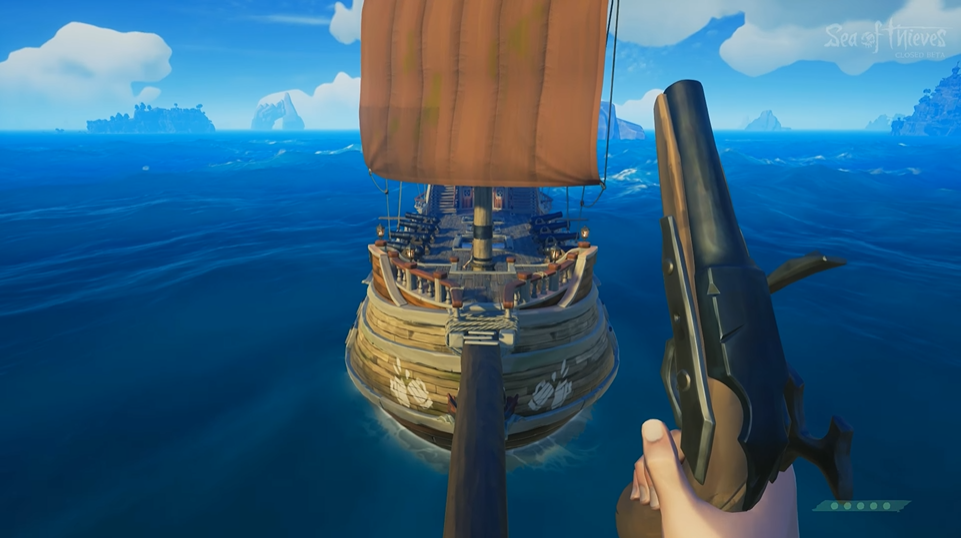 Own enough food at all times

It is important to have some food available before engaging in any fights. They are useful in reenergizing your character after his health has been depleted from a fight. In Sea of thieves, food is categorized into 4; fruits, fish, meat, and bait. Importantly, make sure you cook your meat and fish before eating them.

Fruits in the game are usually found in barrels and are the surest source of health in the game. Bananas, coconuts, pomegranates, and mangoes have health values of 20, 30, and 40, respectively. You can find barrels of fruits on the seashore or afloat on the sea close to a wrecked ship. On the other hand, meat can be obtained from animals you kill in the game.

Play on safe grounds only.

Sea of thieves allows you to play on a very large expanse of sea. However, it is more important that you only sail your ships in areas shown on the map. So, you must never get caught in activities that you totally forget to look at your game map at intervals.

Just in case you ever wander away from safety, you’ll always know without anyone having to tell you. You’ll notice that the color of the skies and water around you now has a reddish appearance. Before long, your ship will begin to creak as it suffers damage. Make sure you always have an eye on the map.

Whenever you’re sailing the oceans, your ship will suffer blows whether or not you want it to. You could have enemies shooting cannonballs at your ship or caught in a storm. An extremely dangerous scenario comes to play when you get attacked by a Megalodon or the pinkish Kraken.

You can easily find out if your ship takes damage from a Megalodon encounter or a cannonball. However, it may be hard to detect that your ship’s belly is getting filled with water during or after a rainstorm. Regularly check your ship for damages and use planks found in your kit to repair them.

Your team members should be close.

If you’re looking to survive Sea of Thieves, then we advise that you don’t play as a loner. It can be easier when you’re all sailing aboard a ship. If you’re on an island with your teammates, finding them can be difficult as there isn’t any beacon pulse or radar to locate them.

Thankfully, the game has a communication system that you can use to communicate important information with them. The voice chat feature can be enabled in the Audio settings found in the game’s settings tab. From this tab, you can turn on and customize your voice chat.

You can be rejoicing over a ship filled with gold one minute, and in the next minute, you’re watching all that precious gold going down the bottom of the ocean. That’s not a deterrent, though; it’s what real pirates suffer after all.

Check the tips we’ve listed above to help you enjoy a smooth game. Make sure you have good food available while your ship is still maintained in good shape. Most importantly, avoid uncharted waters and ensure you’re not too far from your teammates.

Masab Farooque is a Tech Geek, Writer, and Founder at The Panther Tech. He is also a lead game developer at 10StaticStudios.
When he is not writing, he is mostly playing video games

Masab Farooque
View More Posts
Masab Farooque is a Tech Geek, Writer, and Founder at The Panther Tech. He is also a lead game developer at 10StaticStudios. When he is not writing, he is mostly playing video games

How to Locate All Legendary Pokemon in Pokemon Scarlet and Violet

Storytelling for an About Page: Why and How?

How to Make Money Through Discord?

How to Locate All Legendary Pokemon in Pokemon Scarlet and Violet

How to Get Kingambit in Pokemon Scarlet and Violet?

Get our latest news straight into your inbox.

Please input your email address. That email is already subscribed. Your address has been added.